With the leftovers from the meatballs, we made lasagna.  This was more intense than lasagnas in the past, mainly because I made the noodles in addition to the sauce and the assembly of the thing itself. I used the recipe that came with the pasta roller attachment

, and for the first time used semolina flour instead of all-purpose. It was initially harder to get the lumps of dough to start rolling through the rollers, but after the first few tries everything went smoothly.  I think the semolina pasta comes to the right texture sooner than all-purpose flour pasta does, but I have nothing to back that up. 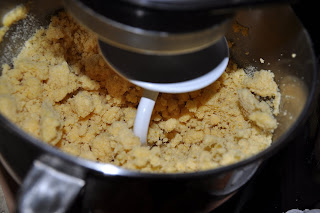 The dough was crumbly and needed slightly more water than the recipe called for in order to form the dough ball. I enjoy saying the words "dough hook" and just about drove the husband crazy saying it so many times when the dough hook was in action.

I let the noodles dry on our pasta rack for awhile. I'm really going to have to get much better at remembering/writing down times if I want to keep posting recipes for others to try. The pasta recipe made enough noodles for 2 batches of lasagna, so half of them got wrapped in wax paper, put in a container, and are now enjoying a chilly nap in the freezer. 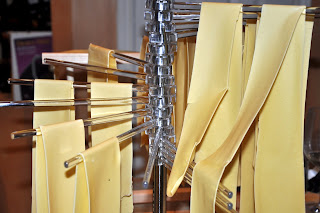 For the layers, I mashed up the meatballs and blended up another can of tomatoes to add to the sauce.  I also cooked some spinach and threw that in the blender as well. For the ricotta layer, I mixed a few spoonfuls of prepared pesto (Central Market prepared foods bar) with the ricotta prior to spreading it on top of each pasta layer. I did not use the traditional bechamel sauce, sad to say, but that will be a project for another time. Steve wanted lots of cheese on top of his lasagna. 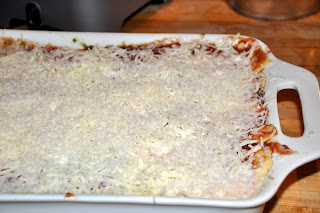 For some reason, this lasagna did not firm up in the middle, even after a night of refrigeration. I'm afraid the spinach might have added too much liquid to the sauce portions of the layers.  Nonetheless, it was good and a great way to use up the rest of the meatballs. 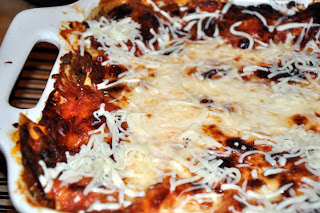