1. Make your crumb crust.  Take 10 oz of teddy grahams (one box) and turn them into crumbs.  I used the food processor.  Melt 9 tablespoons of unsalted butter.  Mix together the crumbs, the butter, 1/2 cup sugar, and 1/8 teaspoon salt.  Press the mixture into the bottom and up the sides of a springform pan (mine is about 9 inches).  If you want less crust on the sides, don't use all of the recipe.
2. Preheat the oven to 350 degrees.
3. Heat the sugar in a dry saucepan over medium-low heat, until it melts and turns light golden, stirring occasionally to frequently.  This step will take awhile, but yes, the sugar does actually melt.  I went ahead and whipped the cream cheese while I was waiting. 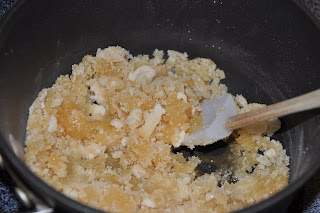 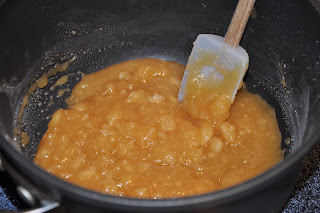 4. Let the sugar achieve a darker golden color, swirling the pan occasionally.  This step takes much less time, thankfully.  I was getting impatient. 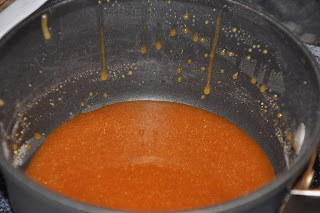 5. Remove the pan from the burner and add the cream.  The mixture will bubble and steam.
6. Return the pot to the same lowish heat as before, and stir.  Eventually the caramel will stop being a clumpy lump on your spoon/spatula/whatever and blend in with the caramel. 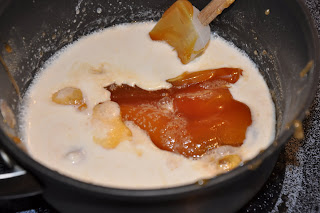 7. Once it is all melty and smooth, remove it from heat and stir in your chocolate.
8. If you haven't done so already, whip your cream cheese until it is fluffy.  I used the regular attachment (not the whisk) of my KitchenAid. 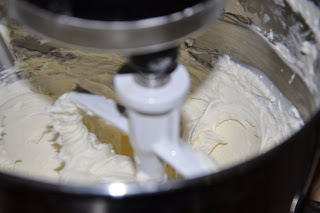 9. Slowly add the chocolate-caramel mixture.  Scrape the sides and continue to beat. 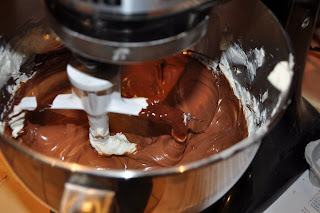 10. Add eggs, one at a time, scraping bowl before each new addition.
11. Add vanilla, blend.
12. Pour the cheesecake mixture into the crust.  Place the pan on a cookie sheet to catch the leaks.  All that leaked out of mine was lots of what appeared to be butter.
13. Cook the cheesecake for about 55 minutes.  Remove it from the oven when the center is still wobbly but the edges and most of the top surrounding the center is set.
14. If your crust did not go to the top of the pan, run a butter knife around the edges down to the crust to loosen the cake. Let the cake cool completely. At this point, it's time to remove the sides of the pan, and loosely cover it and chill it for as long as you can stand it (the recipe I used calls for at least 6 hours, but we tried ours after about 3, and it was soft, but tasty.  After we taste it again tonight I'll let you know about the extra chilling time).


I prefer my cheesecake coldish, but you can also remove it from the refrigerator and let it come to room temperature before serving.  I served it with fresh whipped cream (1 cup whipping cream, 1 capfull vanilla, and 2 tablespoons sugar, whipped together until it looks like whipped cream and not like liquid). 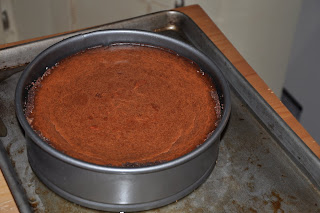 Mm, this looks good. It's been quite a while since I've made a cheesecake. I usually go for standard New York style, but I may have to try this!