Or, Spaghetti and Meatballs All'Amitriciana.
We enjoyed this recipe very much.  The bacon adds a richness to the sauce and the roasted red pepper in the meatballs brightens them and provides a distinct taste, since so many of the ingredients are in both the meatballs and the sauce.  However, it took a lot longer to prepare than I had anticipated, so we ate quite late for a Thursday night.  No matter, still very tasty. Next time we make it I know it will be much quicker, in part because we have made it before and also because I know which steps can occur simultaneously. 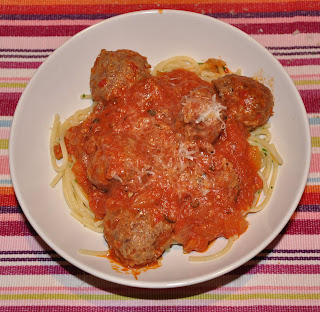 Step by step:
The husband started this process early in the day when he ground up the chuck roast we would use. He is a big fan of the grinder attachment for the KitchenAid. The meatball ingredients require some chopping and grating. Grating onion is so much more painful than chopping it, and my eyes were a leaky mess after the first two grates. The onion candle we keep in the kitchen helped a little, though I lit it after I had started. 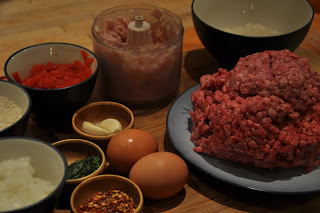 The meatballs themselves were easy enough to make, combine all of the ingredients after pressing the garlic on top of the bacon paste (!) and mix, and then let it sit. 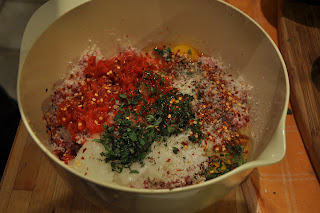 Instead of starting the bacon for the sauce at this point, like we should have, we waited the full 15 minutes to form the balls (probably longer) and passed the time by preparing other ingredients for the sauce.  The tomatoes went in the blender (this may be one of the only places we deviated from the recipe. We did use San Marzano tomatoes in juice, but they were whole tomatoes, not diced.  I figured that since the recipe called for them to be blended until smooth, it didn't matter) and quickly got blended into a lovely thick tomato-y liquid. (Highly recommend this brand

of San Marzano tomatoes - whenever we find them in the store, we buy 4 to 6 cans to have on hand. They are by far the best sauce making tomatoes I've used.)

(Have I mentioned how much I love my blender

? It is incredibly fast and very powerful. KitchenAid, three speeds and a pulse option. My one requirement when I purchased it was that it could blend ice to a frozen margarita machine consistency, and it hasn't let me down. It can also chop ice to a coarser consistency, and it makes pureeing soups and other jobs a cinch.  I LOVE my blender.) 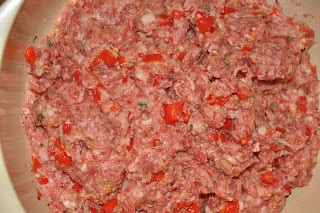 After the waiting period for the meatballs, the husband got started shaping them while I cooked the bacon for the sauce. (As I said, this step could have been started immediately following the combining of the meatball ingredients, so the pan would have been ready to take the meatballs once they were formed.) 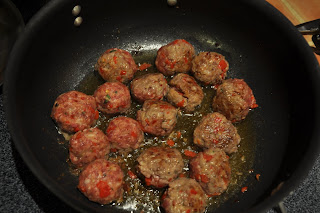 Turning the meatballs in the pan was the trickiest part of the recipe.  We used tongs (I love my tongs

, too) to gently push them over to brown all the sides, but some of them still insisted on coming apart a little bit. It took three batches to get them all done. 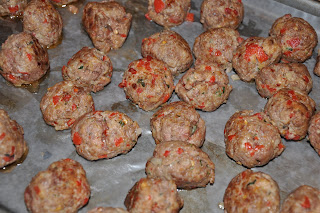 The sauce was easy, just took some monitoring, since things were added in steps. 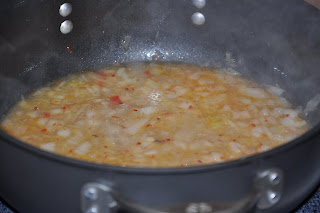 By the time the meatballs went in, we were very hungry, so letting them cook for enough time was hard. Pasta boiled, was tossed with olive oil and Italian parsley (instead of marjoram) and then we ate. Yum. Some of the meatballs had come apart in the sauce, so in addition to whole balls there were some meaty chunks. The sauce was a nice texture and consistency, thicker than I would have expected but very smooth and velvety. We found the spice levels to be just right (we enjoy spicy things, being in Texas and all) but if we make it for a group in the future I would cut down on the red pepper flakes in the sauce. Some of our northern relatives would find it to be too much.