It's Saturday morning, and that means magazines, cookbooks, and a shopping list. It's actually been awhile since I've created a grocery list this way, but it is the preferred method since it means we will then have actual rounded meals. Planned out ahead of time, not decided upon at the last minute because steaks looked good at the grocery store. Again. 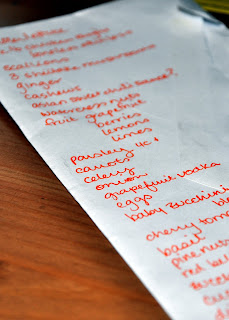 So this weekend, along with this long list, we have a menu for the week. Tonight is salmon with mango-peach salsa, broccoli, and cilantro-lime rice. Also in the running for dinners this week are the lettuce cups in this month's Bon Appetit, a favorite summertime tagliatellle with cherry tomatoes and zucchini, and something to accompany a tomato cucumber salad that I will continue to make all summer long, while these ingredients are at their best.
My goal: to post at least one of these recipes this week. Maybe more, if I get ambitious.
In other news, part of why this blog has been so lacking in new content the past month or so is because we're still dealing with the aftermath of our house flooding. All of the furniture that is usually in our guest room and library/workout room is in the den off the kitchen, and throughout the hallways. It is a constant reminder of how much work we have done and have left to do before returning to normal. We're doing the work ourselves, trying to get the most out of the insurance money. The two rooms have their new floors and baseboards in them. This weekend we plan to caulk and paint, with the hopes of starting to move furniture back in Sunday night or Monday.
Reviewing the pictures of the damage to post on here, I recalled the one massive feeling of the day, aside from the despair that coated everything. Never is it more clear how much stuff you have than when you're forced to move it quickly to prevent ruin. The other part of that, at least for me, was the realization of exactly how clean we keep the house on a regular basis, because a lot of the stuff that had to be moved would not have been there if the house was immaculate. I would like to say I learned from this experience and now keep the house shiny and clean with everything put away, and maybe after we get finished with the renovations I will, but now there is still stuff all over the house (in fairness, there kind of has to be now). We'll see.
Aside from new floors, the major positive that came out of this experience is the huge amount of stuff I was finally able (allowed myself) to get rid of. The trunks of my car and my mom's car were both completely full of clothes and other goodwill-worthy items. That part of it felt good. 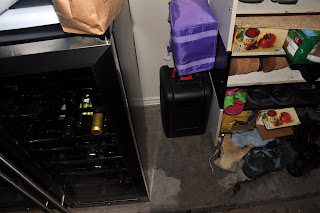 The water seeping into the garage. The garage is at the front of the house, the broken toilet at the back. 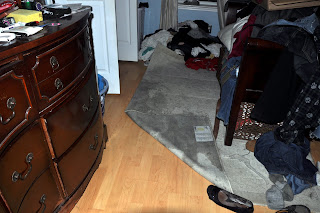 Water on the rug in the bedroom. The pile of clothes at the top of the picture was in the bathroom, laundry sorted and ready to get washed. 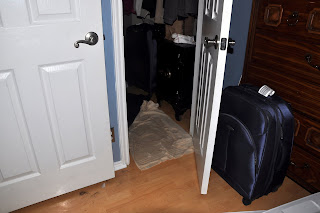 Closet in the guest room. 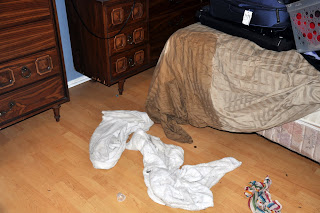 Floor of the guest room. The comforter absorbed a lot of the water - the edge was in contact with the floor. The bed was one of the first places we started stacking things to get them off of the floor. 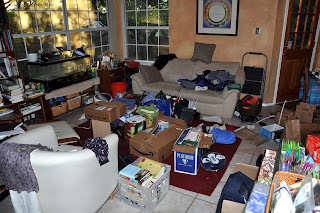 The den off the kitchen, with the contents of bookshelves and the floor of my closet. 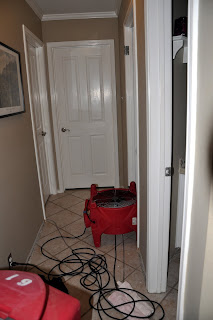 The giant fans that dried out the house (and drove us crazy with the noise for days).

The fan and dehumidifier in the bedroom. They only tore out half the flooring in that room because the water only reached so far. The floor is still like that. 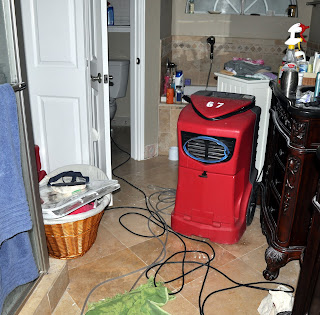 The bathroom. The cords ran all over the house to various outlets and bathtubs.
Posted by Unknown