The husband was still asleep. I started making breakfast, and mid-way through the bacon cooking I realized I wanted migas, but didn't want to have to cook after he got up. I wanted everything to be ready by then. Migas became migas casserole, and it stayed nice and warm in the oven until he woke up. Serve it with fresh fruit. 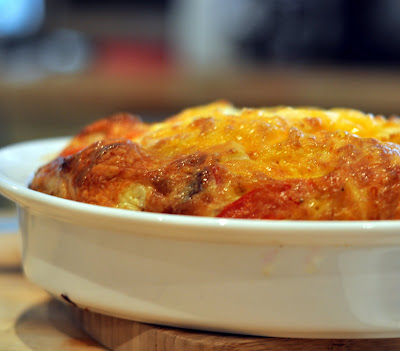 Preheat the oven to 375.
Cook bacon. Drain on paper towels. Tear corn tortillas into bite sized pieces. In the same pan, with bacon grease that remains (or olive oil if you choose), cook corn tortilla pieces until crisp, stirring occasionally (for me, that means I stir almost constantly thinking that the more or faster I stir, the sooner the food will be done). Drain tortillas pieces on the paper towel with the bacon. When the bacon is cool enough to handle, break it into small pieces.
In the same pan, add the onion and red bell pepper and cook until onions are almost translucent and peppers are tender. Scrape the pan to remove browned bits. Remove from heat. Add the bacon and tortillas back to the pan and stir to combine.
Prepare the eggs. Whisk the eggs with the cream. Add pepper to taste (but don't taste the raw eggs, just guess).
Grease a small casserole dish. Place about half of the onion/bacon/tortilla mixture in the bottom of the dish. Pour half of the egg mixture over it, and top with half the cheese. Repeat.
Cook on the middle rack of the oven for 45 to 50 minutes until the eggs are firm. Let it cool for about 5 minutes. Serve with chopped tomato, cilantro, avocado, and anything else you want (black beans, salsa, and so on).
Posted by Unknown